There are more than 60 known diseases which can be transmitted from dogs and cats to humans. Most of them can easily be avoided through elementary hygienic measures. Some of them, though, are a serious danger. In Cape Verde there are no known cases of rabies, the most dangerous zoonosis. The most common zoonoses in Praia are parasitic diseases as follows:

Some of the tapeworms living in a dog‘s bowels can cause cysticercosis in the human body.  Cysts containing tapeworm larvae develop in various organs like liver, lung or in the brain and even can reach the size of a football. The pressure on organs and the rupture of cysts can cause life-threatening situations.

Round worms of the dog occur worldwide. Round worms also parasitise in the bowels of animals. The eggs of the parasite are released with an animal´s feces, and develop into infectious larvae.  The intake of these larvae by humans can cause high fever and liver damage. Children are affected first of all, because they often play on the ground or in the sand.

Scabies mites live in the top dermal layer and perforate it with channels to feed on tissue. This causes a very painful bloody acarodermatitis which leads to alopecia, incrustation, bleeding, emaciation, and eventually to death. Humans regularly get infected by dog scabies. Although the disease cannot spread as dramatically as in the dog, the skin is damaged and therefore the body‘s defenses are affected. The vulnerability to infections of the skin and the whole organism increases.

Dogs with scabies before treatment 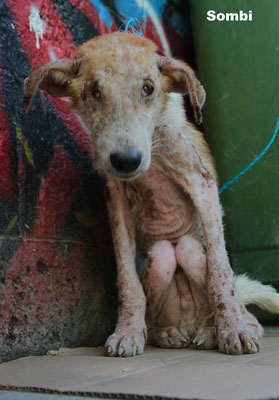 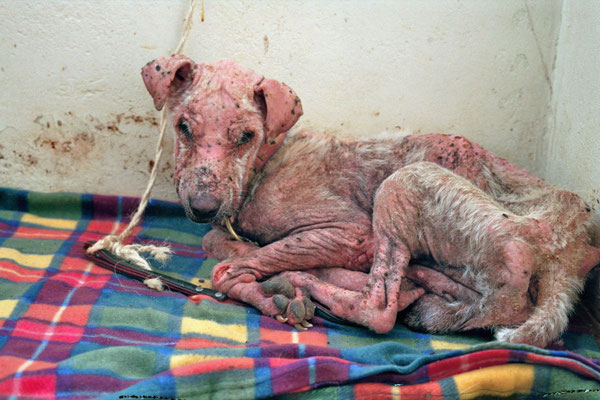 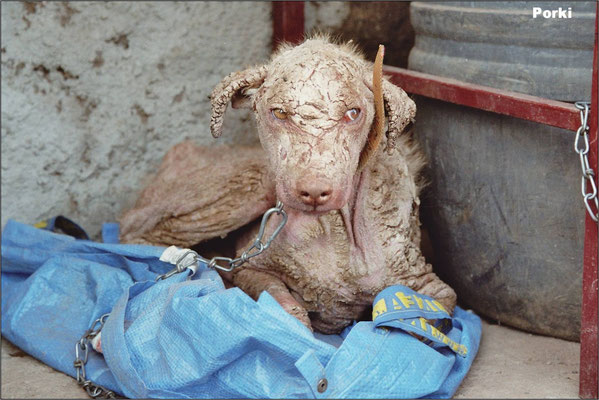 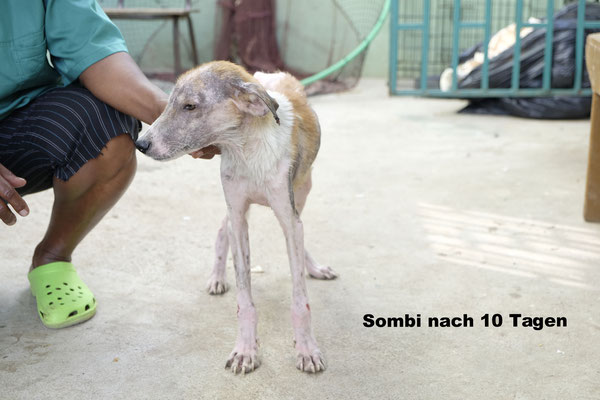 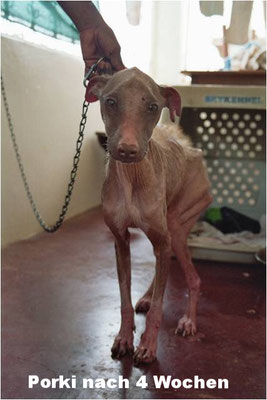 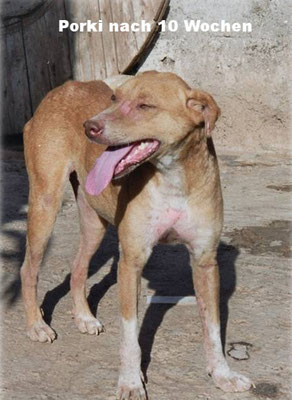 Skin fungus mostly appear when the body‘s defenses are reduced. There are several sorts of skin fungi, likewise important for humans and animals.

Fungus Infections on the skin of debilitated dogs are transmittable to humans, especially when the body‘s defenses are reduced through infections, parasites or malnourishment. In Praia children often suffer from a scabby dermatitis in the area of the head, which is mainly engendered by fungi, but in most of the cases comes from mixed infections. In addition to fungi, mites and bacteria are involved.

Fleas are not choosey in picking their victims. The potential transmission of infectious diseases on the human by a flea bite is significant.